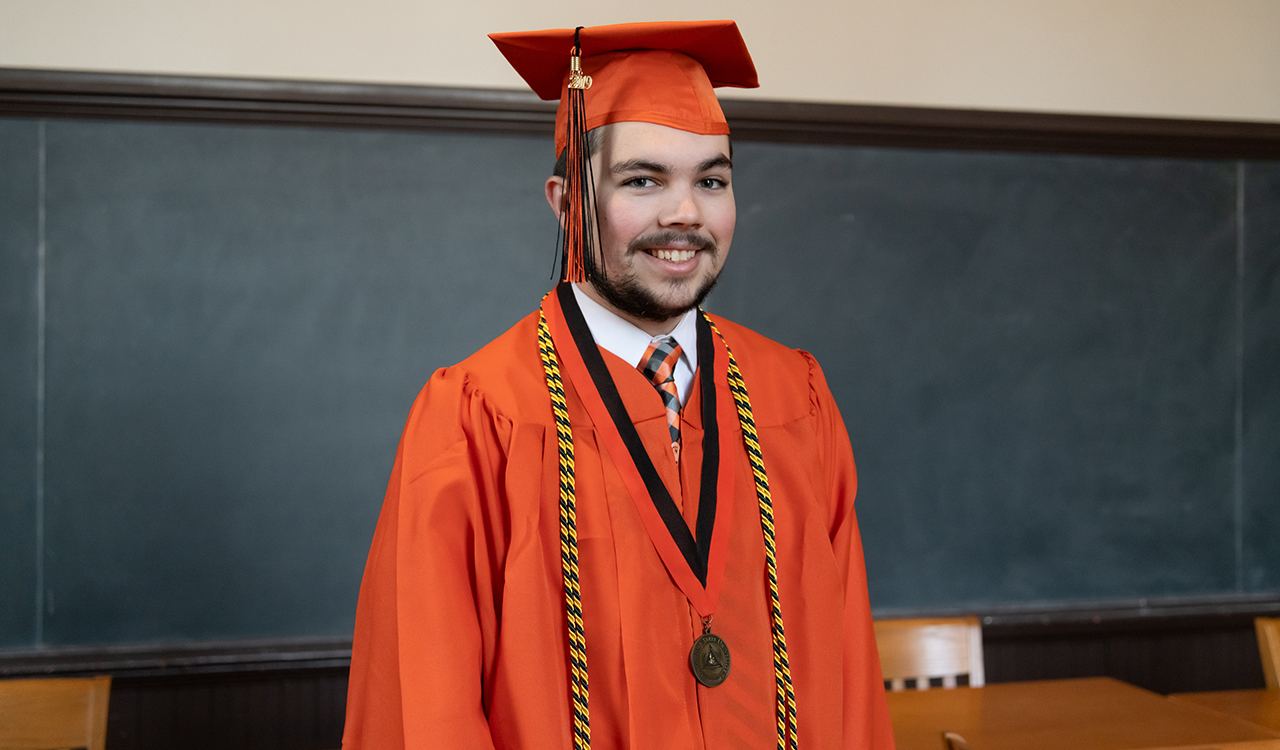 Hollands ended up staying at OSU for a total of 3½ years, and accepted his three diplomas in December 2019. He is applying to law schools, but hasn’t settled on his destination.

"I figured all those degrees would help by giving me the ability to communicate with people and do analysis," Hollands said.

Still, it’s about much more than communication and analysis to Hollands. His desire to serve fuels his law-school aspirations.

"The ideal situation would be to have a career where I have the flexibility to do pro bono work and to use my talents to give back to people who are facing really tough situations in life," he said. "I just want to help people turn it all around and give them a second chance."

Although Hollands has known since high school that he wanted to pursue law, his altruistic motivations got a boost thanks to equally service-minded OSU professors and advisers.

"With every department I've been involved with, there have been so many who have guided me," he said. From Spanish to economics to political science, "they're all filled with good people."

Included in that group is political science visiting professor Holley Hansen, who got to know Hollands both in class and in his job as a research assistant.

"He likes to absorb information and think about it before speaking out on an issue," Hansen said. "When he speaks, he is well-informed and brings a level of detail above and beyond the typical undergraduate student. He is intelligent, hard-working and focused, and I am confident that he will achieve great things."

One such achievement — in addition to his triple-major feat — is being named the CAS Orange Gown Graduate for Fall 2019 Commencement. The honor recognizes outstanding undergraduate performance. And like the Orange Gown Graduates who preceded him, Hollands led his fellow classmates into commencement carrying a ceremonial banner and wearing an orange cap and gown.

"It's honestly a little terrifying," Hollands admitted. "I feel like the stakes are a lot higher when you're the first one."

The Orange Gown Graduate honor was a complete surprise. In fact, when he got the call and saw it was from the College of Arts and Sciences, he assumed there was a complication with his degrees.

"I thought something had gone wrong," he said. "So it was a great feeling knowing that it was something that went really right."

Along with his three majors, Hollands also interned at Legal Aid of Oklahoma and served as the vice president of OSU’s Economics Society. He recognized the advantage of these opportunities and offered some advice to incoming students.

"If there are things you'd like to do in college, don't wait until you're a senior to do them," Hollands said. "If there's a club you really enjoy, go do it. If you want to work for an organization or get an internship, get on top of that right away. It's going to pay off in big ways by the time you're graduating."