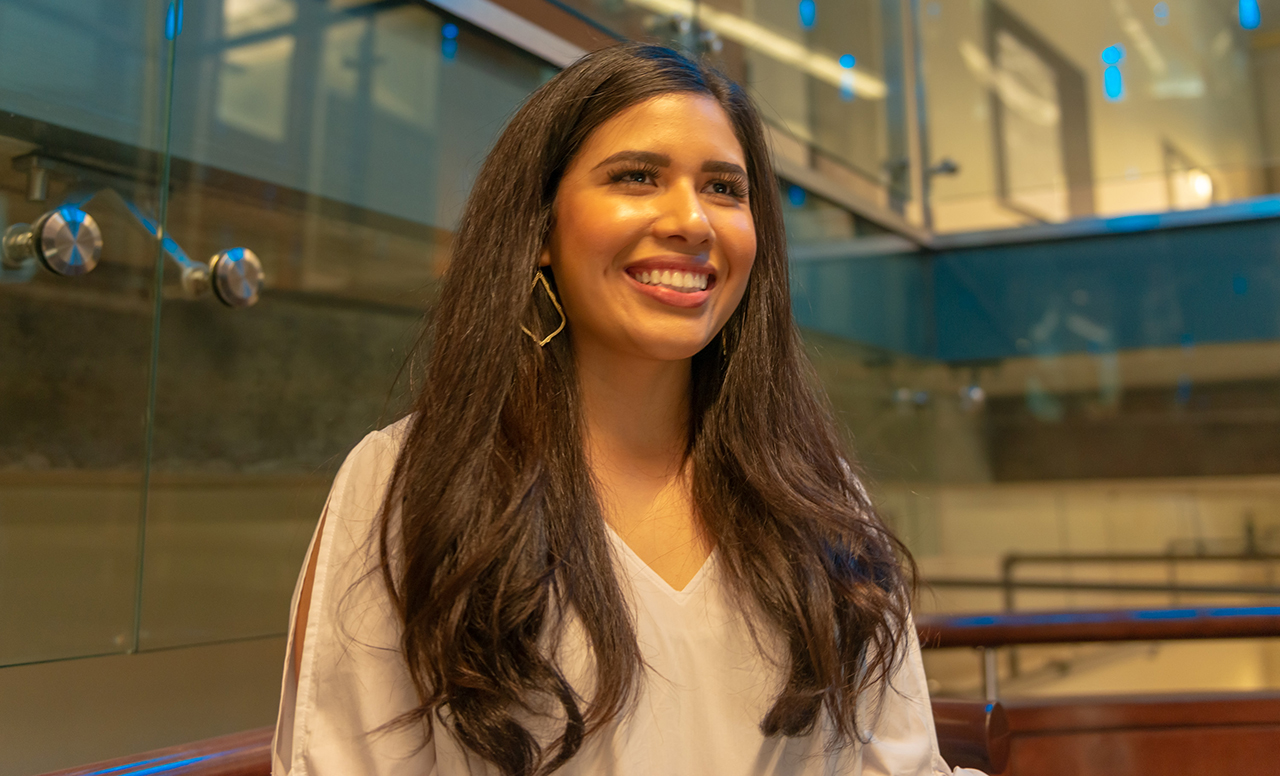 Alma Rios was a Sooner fan until her brother came to Oklahoma State University.

“I visited my brother here when he was awarded the Top 10 Freshmen,” Rios said. “That was my first time on campus, and everybody was just so kind and inviting.”

That’s when Rios met Lee Bird, the now-retired vice president of student affairs who inspired her to apply to OSU.

“She probably doesn’t remember this,” Rios said. “After the ceremony, she jokingly said to me, ‘Hey, I expect you to get this award when you’re here too.’ I don’t know why, but that stuck with me, and I didn’t even know who she was back then.”

“Looking back, I’m like, ‘OMG, that’s Lee Bird, that’s incredible!” she added. “OSU was the only school I applied to.”

Rios was recently named one of OSU's 15 Outstanding Seniors by the OSU Alumni Association.

She was born in Mexico, and her family moved to the United States when she was 2.

“I applied to be a naturalized American citizen when I turned 18,” Rios said. “My brothers inspired me to do it.”

She officially became a citizen in August 2015 after filing an application and passing a background check as well as the interview and citizenship test.

Rios was excited to share the news with her new Cowboy family. She told her Chi Omega sorority sisters in a group chat and received a tremendous amount of love and support.

“They were like, ‘Oh my gosh, that’s so cool!’,” Rios said. “For them to know me for two weeks and be so happy for me, that was really awesome.”

Growing up in Buffalo, Oklahoma, which has a population of just over 1,000 people, Rios participated in many things.

Rios started her undergraduate career as a biomedical engineering major but soon changed to biochemistry after discussing her career path with other students and professors.

“Well, I know I really want to be a doctor,” she said. “I started talking to people who wanted to go pre-med, and they encouraged me to shadow and keep talking to anybody in the health care spectrum.”

A people-oriented person, Rios wanted a career with human interactions while caring for others.

“I have a little bit of experience in a hospital setting, and I love it so much,” Rios said. “What keeps me going isn’t necessarily a professor or some kind of test score. It’s those interactions.”

Rios spent her summers working in her hometown.

“I was a certified nursing aide one summer, which is like the bottom of the food chain in a hospital, but I had more patient interactions than the doctors or nurses, and there were so many patients whom I fell in love with,” Rios said. “They told me, ‘Alma, you’re going to make a great doctor someday. I can’t wait for you to come back to Harper County and be MY doctor.’ It’s the little things like that that keeps me going and reassure me that, ‘Yes, it’s hard, but everything in life that’s worth it is going to be hard.’”

Rios has also worked as a grain-scale operator where she weighed trucks and graded wheat for sorting.

“I’d go in at 8 in the morning and stay until about 1 the next morning, but it was so much fun,” she said. “Harvest season is crazy, but it taught me to appreciate the farmers and all that they do.”

During the school year, Rios commits her time to studying and being involved on campus.

“I think being involved is the equivalent to a non-paying internship or job; it’s a big-time commitment,” she said. “I’d say my expertise is campus organizations or involvement around the community.”

Rios has participated in the President’s Leadership Council since her freshman year and is currently a facilitator. She helped mentor and invest in outstanding freshmen by teaching them the importance of leadership and serving throughout life. She understands the overwhelming feeling of coming to a big university and encourages council members to not be afraid of a change in direction.

“Freshman year is hard, especially when you meet rejection for the first time like I did,” Rios said. “It’s so rewarding to see incoming freshmen progressively find their niche and passion.”

Rios’ commitment and involvement on campus paid off when she was chosen to be president of her sorority, which she calls one of her biggest blessings in college.

“I learned, most importantly, how to lead a group of people and how to individualize,” Rios said. “I never knew that people had different leadership styles. I’ll use this skill for the rest of my life.”

“My sorority has given me some of the most genuine lifelong friendships that I’ve always longed for,” she said. “I’m really thankful for them.”

Rios is passionate about helping and taking care of others. She will continue to work in Oklahoma before applying to medical school. She’s also planning her upcoming wedding in early 2020.