Noah Mennenga is excited to watch the Michael and Anne Greenwood School of Music continue to grow larger and even stronger than it already is in the near future. The trumpet performance senior will graduate in May after a wonderful experience at Oklahoma State University. And as he continues his musical career, he looks forward to telling members of the next generation to consider OSU.

Mennenga spoke Saturday morning at the groundbreaking for the new Greenwood School of Music building, which will house a variety of music laboratories, classrooms, rehearsal spaces and teaching studios equipped with the latest technology for high-level studio production, offering a premier teaching and learning experience. 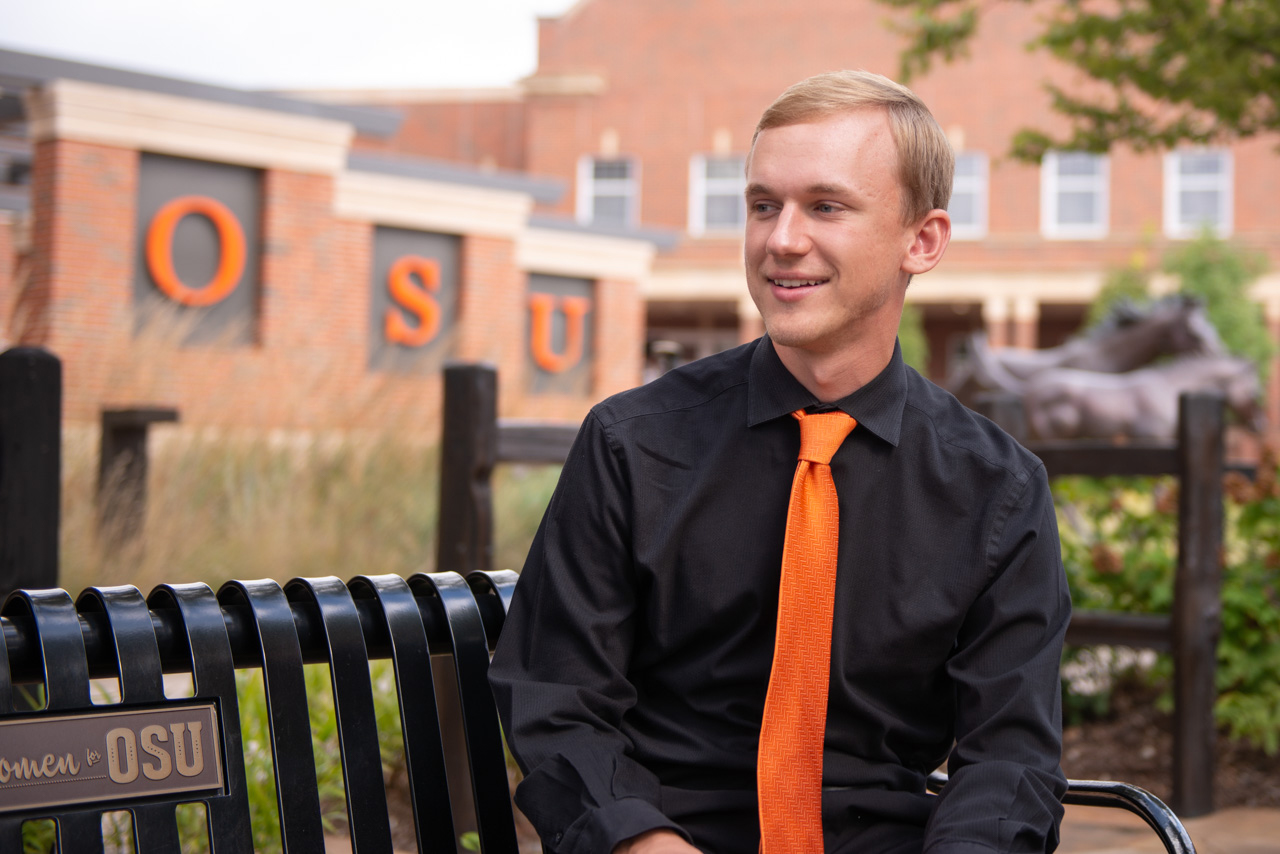 He expressed what this addition and The McKnight Center for the Performing Arts will do for the more than 2,100 students who participate in music programs at OSU, including the Cowboy Marching Band, orchestra and various choral groups.

"It will bring fresh life and excitement into the music program," said Mennenga, a native of Cottage Grove, Wisconsin. "It will add more individual practice spaces so that students can work on their craft all day. There will be chamber ensemble rooms where you can work with small groups. It will provide a state-of-the-art concert hall with really great acoustics. That is essential for performances. And it will create relationships with the New York Philharmonic and other guest artists who come in."

This spring, he will perform with Christopher Martin, principal trumpet for the New York Philharmonic. Martin will share the stage with the OSU Wind Ensemble on April 18, 2019.

"He was the principal trumpet for the Chicago Symphony Orchestra for 11 years, and now he has been with the New York Philharmonic for a couple of years," Mennenga said. "To be either one of those is incredible. To do both shows you how great he is, and for him to come to OSU is really cool."

Mennenga will be attending graduate school somewhere else next fall, when The McKnight Center opens with a performance by the full New York Philharmonic, as well as when the Greenwood School building opens later.

"I am disappointed that I won't be around to enjoy these facilities as a student, but I know that they will play a big part in further strengthening the reputation of the program," Mennenga said. "People from all over will be aware of the Greenwood School and Oklahoma State University. To have been here and played a part in creating the momentum before these facilities open makes the time I’ve put in here even more worth it."

He is applying to America's best graduate programs for trumpeters. He has also applied for a Fulbright Scholarship that would allow him to go to Switzerland and study with two of the best in the world Switzerland. What comes after that is unclear, but he definitely plans to continue playing.

"My dream job would be to make and play music that is beautiful, that people enjoy, that tells stories and communicates ideas and emotions," Mennenga said. "That could be solo music or chamber music or orchestral music. I want to bring joy to people and connect with people, and do good work outside of that, teaching and mentoring young musicians."