When Field Watts visited Oklahoma State University as a high-school senior, it was primarily to rule out OSU, which he viewed as a large, public institution. The Fort Smith, Arkansas, native had planned to go to a smaller, liberal-arts college in Arkansas or Missouri. That changed after his visit.

“I fell in love with the campus,” Watts said. “It was very beautiful, and there were so many people here.”

The wide variety of people, not just the number, was very compelling to Watts. One of the people he met was chemistry advisor Sherry Orr, who connected Watts with a professor. That resulted in an invitation to work in Dr. Richard Bunce’s organic chemistry lab beginning his first week of school.

Watts first worked with a postdoc in the lab, and later worked on several of his own research projects involving anti-cancer drugs. However, chemistry is just one of many interests. Watts had a second major in math, and added an unrelated minor. 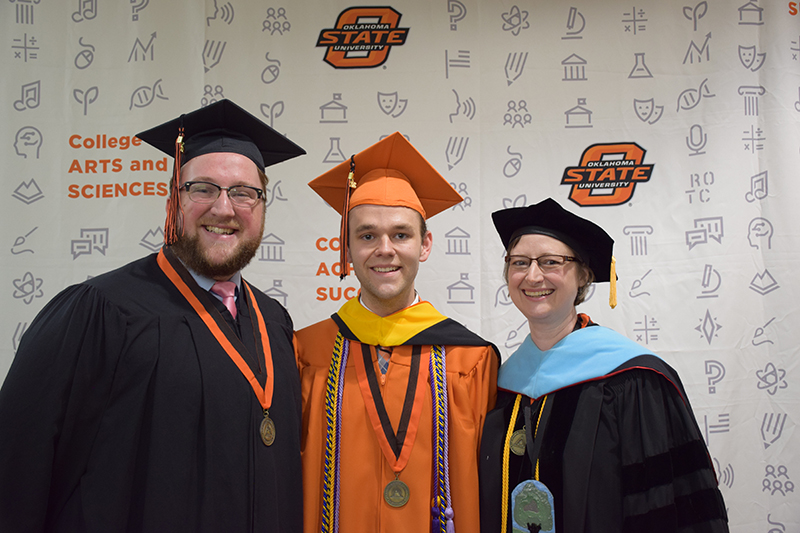 “After taking an intro to lit course, I wanted to add an English minor,” Watts said. “My advisor said, ‘Just do it.’ So I did.”

Also following the literature class, Watts began a second job as a consultant at the OSU Writing Center. The unique combination of working in research and the Writing Center helped Watts choose his future path.

Watts worked on several Writing Center projects, and served as an assistant director his senior year.

Two majors, one minor and two jobs sound like a heavy load, but Watts was able to succeed by prioritizing.

“I pushed myself to do a lot so that I did well in my classes, but my priority was working in the lab and the Writing Center,” Watts said. “I wanted to prioritize spending time with people in the workplace and working on projects. This was exciting and engaging, which I think helped me do well academically.”

Watts’ academic success, along with his commitment to service and research, is part of why he was the spring 2018 orange gown recipient.

The College of Arts and Sciences orange gown recipient is nominated and selected by a faculty committee. There is no application process.

Dr. Amy Martindale, the College of Arts and Sciences’ assistant dean for academic services, said Watts’ diversity of academic interests were key to his selection. She noted that he completed both majors with honors while excelling in research and service. He also received a Niblack research award, two Wentz scholarships, and worked four years in a chemistry lab.

“In addition, Field worked at the Writing Center for three years, serving as an assistant director during his senior year,” Martindale said. “He well represents the breadth of arts and sciences, and therefore was chosen to represent the student population of the college.”

The orange-gown experience provides a unique perspective for graduation. One of Watts’ favorite things was leading the procession from the Student Union to Gallagher-Iba Arena.

“There are so many people in Arts and Sciences, and I was at the front of the procession,” Watts said. “Just turning and looking behind me, my classmates were all the way back going down Hester. It was really cool.”

Asked what he will miss about Oklahoma State, Watts said, “The same things that brought me here: the beautiful campus, the people and the professors. One thing I won’t miss will be the weather.”

Watts plans to become a professor himself. He has been accepted to the University of Michigan to pursue his Ph.D. in chemistry education.