About 2,500 miles west of Hawaii lies the Tarawa Atoll, one of 33 coral atolls constituting the island nation of Kiribati. In World War II, Tarawa was on the outer fringe of the Japanese Empire before United States Marines attacked the island and took control of its airfield. It was not without cost, as around 1,100 U.S. casualties occurred during the 76-hour Battle of Tarawa. Yet after the war ended, only 300 or so of these men were located and brought home. It wasn’t until History Flight, Inc., a private, non-profit organization dedicated to recovering WWII MIA personnel, set out to find them that so many have been located and returned to the United States in coordination with the U.S. government’s Defense POW/MIA Accounting Agency (DPAA).

Dr. Stephen Perkins, an associate professor of Anthropology with Oklahoma State University’s Department of Sociology, traveled to Tarawa in the summer of 2016 as a volunteer with History Flight. This past summer, History Flight’s founder and director Mark Noah invited Perkins back to Tarawa for more volunteer work and to attend a Repatriation Ceremony for 24 U.S. personnel recovered by History Flight, the second-largest recovery of battlefield remains since the Korean Armistice.

“The investment of 10 years of work and $6.5 million has resulted in the recovery of extremely significant, but not yet to be disclosed, number of missing American service personnel,” Noah said. “Our transdisciplinary team – including many volunteers – of forensic anthropologists, geophysicists, historians, surveyors, anthropologists, forensic odontologists, unexploded ordnance specialists, medics and even a cadaver-dog handler have excelled in difficult conditions to produce spectacular results.” 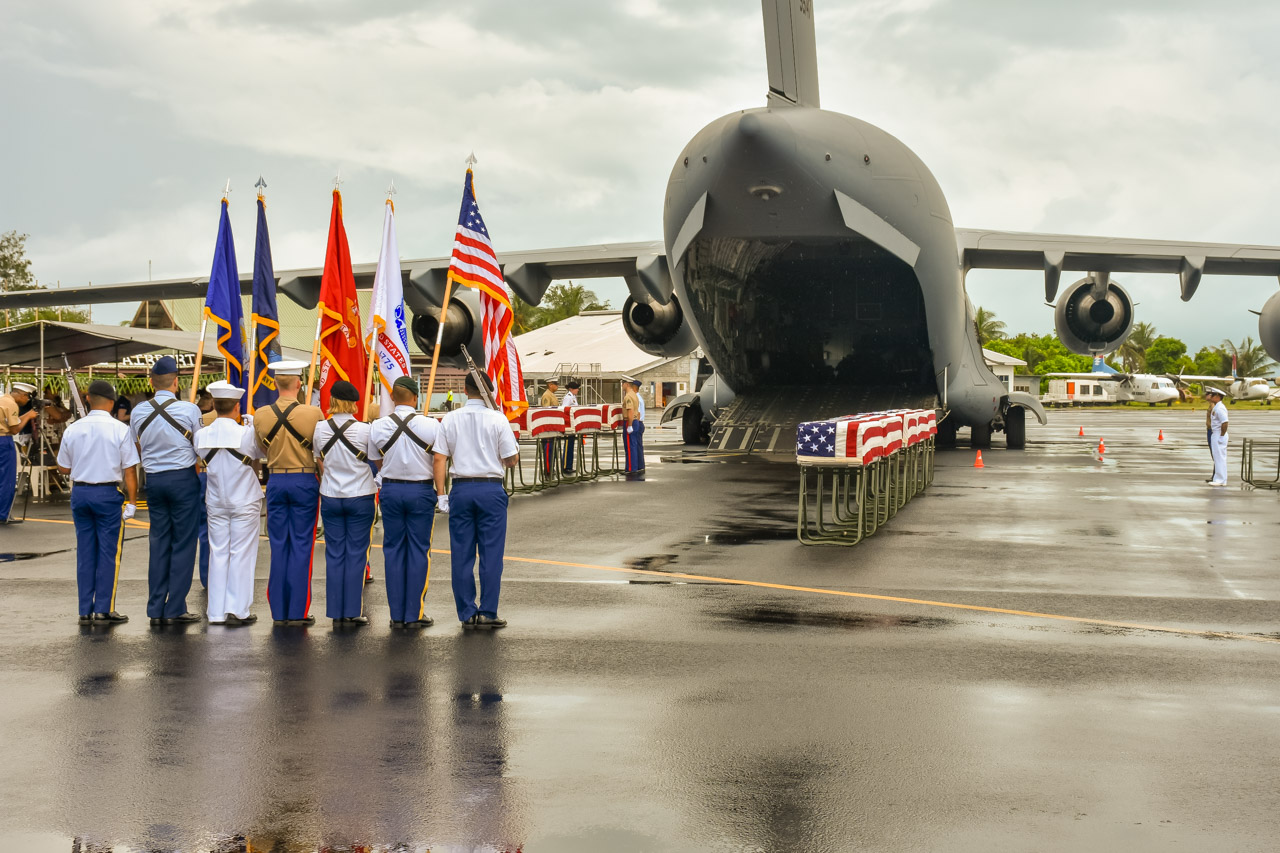 On July 25, Perkins attended the Repatriation Ceremony. Lt. Gen. David Berger, commander of the Marine Corps Forces Pacific, presided over the official transfer of these men from the Kiribati government to United States custody. Berger spoke of History Flight’s contribution to bringing home every warrior who fights on behalf of the United States. After loading the fallen onto a C-17 military transport aircraft one-by-one with a salute and color guard standing by, they were flown to Hickam Air Force Base in Honolulu, Hawaii, for final identification by DPAA and eventual repatriation to surviving family members.

“The ceremony is done with all of the formality that would normally be accorded someone who was killed in combat, except these guys died in 1943 and 1944.” Perkins explains. “I felt really honored to be able to see it. One of the things that really strikes me is that some of those guys flew in on B-24 Liberators, and flew out 73 years later on this huge C-17 aircraft. It’s a huge gap where these guys have not been in the United States. It was an incredible honor to be there.”

History Flight and the DPAA continue to work on locating and recovering MIA personnel from around the world with the help of archaeologists, such as Perkins. His lifelong fascination with World War II and his professional expertise led him to volunteer on Tarawa Atoll.

“Anthropology is a field which has a lot of opportunities for interesting experiences all over the world,” Perkins says. “This is just one of those opportunities I was able to participate in.”

The United States’ National POW/MIA Recognition Day will be observed on Friday, September 15, 2017. For more information about History Flight or to donate to the organization’s recovery fund, please visit www.historyflight.com.