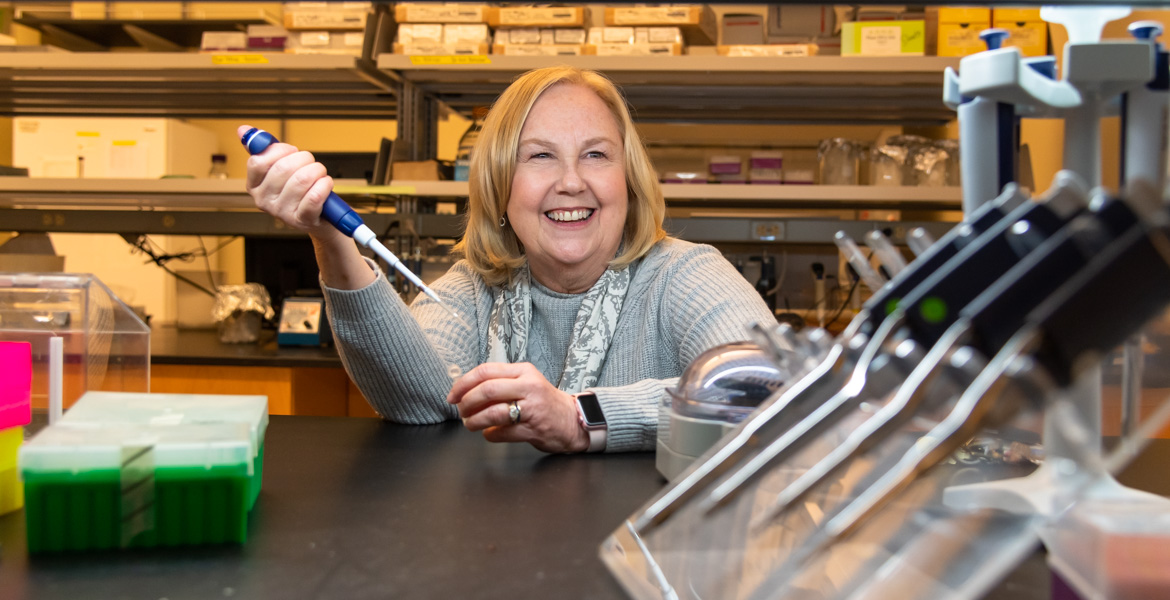 Linda Watson, an Oklahoma State University professor in the Department of Plant Biology, Ecology, and Evolution, is one of five female scientists who have produced a comprehensive analysis of genomic-scale data to understand the historical biogeography of the Asteraceae, also known as the sunflower or daisy family.

Watson, president of the Botanical Society of America, became interested in researching the diversity of the sunflower family when she was in graduate school. And throughout her career she has continued to study what is the largest family of flowering plants, and one that contains important crops, medicinal plants, garden ornamentals and weeds.

During her recent sabbatical, Watson collaborated with researchers from the University of Memphis and the Smithsonian Institution to publish “A fully resolved backbone phylogeny reveals numerous dispersals and explosive diversifications throughout the history of Asteraceae” in the Proceedings of the National Academy of Sciences of the United States of America.

“Phylogeny is a lot like genealogy,” she said. “For example, we are more closely related to our siblings than to our cousins because our most recent common ancestors are our parents, whereas the most recent common ancestors of cousins are grandparents, which is one more generation back in time. Phylogenetic trees are like family trees, but allow us to look back millions of years, instead of just a few generations, through the information coded in the DNA. These studies help us understand the history of the Earth.”

Watson continued, “Dandelion, daisy, sagebrush and ragweed are all part of the sunflower family. The wind-pollinated species, such as sagebrush, cause allergies because they release tons of pollen into the air. But those species with showy and colorful flowers, such as sunflower or zinnia, are nearly always insect-pollinated.”

Many species from the family are food crops, including lettuce, sunflower seeds and oil, safflower oil, and artichoke. Artichoke is actually a thistle with spiny leaves and the head is harvested before the flowers develop.

According to Watson, scientists have begun to manufacture vaccines using plants. And they have successfully isolated and identified artemisinin, a cure for malaria. Artemisinin is a secondary metabolite produced by close relatives of sagebrush for their own defense from herbivory.

“It’s important to understand evolutionary history,” Watson said. “We can advance fields such as medicine and agriculture if we can identify closely related wild species, for example, by understanding the close relationships among species to more accurately predict similar secondary metabolites produced by their close relatives.”

The paper includes genomic data representing nearly 1,000 genes from more than 250 species, and integrates phylogenetic, biogeographic and dating analyses using fossil pollen to estimate its place of origin and the timing and pathways of early migrations. The study revealed that the sunflower family originated in South America at the end of the Cretaceous, about 80 million years ago when dinosaurs still walked the Earth. However, not until the Earth began to cool and habitats dramatically changed around 40 million years ago did the family begin to expand and diversify, which resulted in its tremendous species diversity.

Today, the family occurs worldwide and many of its species are economically important as food crops like lettuce and artichoke, oil crops such as sunflower and safflower, and garden ornamentals like daisies, dahlias, zinnias, and chrysanthemums. Some species are used as medicinals including echinacea and artemisinin. Understanding the history of the sunflower family will aid researchers in protecting rare species, controlling invasive ones, and discovering the natural benefits these plants have to offer.

“The article is the most comprehensive study of the family to date,” Watson said. “And this study is the first mega-family of plants that has been examined at this depth and breadth for the sampling of both genes and species.”