Glen Krutz wasn’t looking for a job when he heard about OSU’s search for a new dean for the College of Arts and Sciences, but this was too good of an opportunity to pass up.

“It is rare for large college dean positions to come open at major universities,” said Krutz, then the University of Oklahoma’s senior vice provost. “I talked to some people whose opinions I respect, and they thought it would be a good fit. When I came to Stillwater, I really liked the vibe. I liked the hard questions the hiring committee asked and what they said about OSU. It was a delightful exchange during an interview that would normally be stressful, not fun.”

The new dean of CAS enjoys both teaching and research. He was drawn to the opportunity to get “closer to the action” going on in classrooms and research facilities that comes with the position.

“I am also looking forward to building relationships with faculty, staff, students and alumni,” Krutz said. “In fact, I’ll need to be in contact with all of those groups regularly to be a good dean.”

His path to a career in higher administration began at the University of Nevada, Reno, where he completed a degree in political science and speech communication in 1990. He was named the outstanding senior of his graduating class at Nevada, which, like OSU, is a land-grant institution.

Because he was considering a career in politics, his first job after graduation was as a U.S. Senate staffer for Nevada’s Richard H. Bryan from 1990-1991.

“I really liked Washington, D.C.,” Krutz said. “It’s a beautiful city that should make all Americans proud. And I would say that over 90 percent of the people I worked with were good people who wanted to do the right thing for the country. I always say that good-hearted people with a servant’s ethic should consider going into politics. But when you work in the Beltway, you figure out pretty quickly whether that’s the career you want. I knew within 10 months that I loved D.C., but I didn’t want to be a lifer.”

Krutz returned to Nevada to work in what is now the Nevada System of Higher Education from 1991-94. He also completed his master’s degree in public administration and policy at Nevada in 1993. His thesis was awarded high distinction. 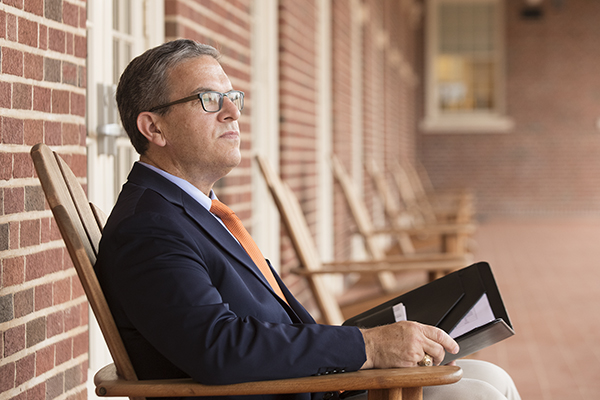 Then he moved on to Texas A&M University, another land-grant institution. There, he earned a doctorate in political science, with specializations in American politics, public policy and administration, and quantitative methods in 1999. He won the George W. Kunze Prize as the top graduating Ph.D. across the campus, and his dissertation, Explaining Institutional Change: The Rise and Impact of Omnibus Legislating, won two national awards from the American Political Science Association.

He joined the faculty of Arizona State University from 1999-2002, directing the ASU-in-Washington program, spending summers in D.C.

That led to his tenure at OU, where he worked from 2002 until joining OSU on July 1. In Norman, he was a professor of political science, associate and acting director of the Carl Albert Congressional Research and Studies Center, and vice provost for academic initiatives.

“The thing I’m proudest of is my work with students,” Krutz said. “Second would be writing three books.”

In 2001, building on his dissertation, he published Hitching a Ride: Omnibus Legislating in the U.S. Congress.

“When I worked on Capitol Hill, I noticed that as the congressional session was coming to a close, these gigantic omnibus bills — massive packages of many bills together — were passed relatively quickly at the end of a sessions just as time was running out,” Krutz said. “I looked into the academic literature, and it always measured congressional productivity by focusing on the number of bills passed. That violated what I saw with my eyes, which was these big bills with 50 or 70 bills lumped together. Is that really the same?”

In 2009, he joined a former grad school colleague, Jeffrey Peak, to write Treaty Politics and the Rise of Executive Agreements: International Commitments in a System of Shared Powers.

“We were examining how presidents increasingly use executive agreements to codify international agreements with other countries instead of using treaties, which require two-thirds approval from the Senate,” Krutz said. “That can have major implications, because they can be undone by the next administration, just like the Iran nuclear deal that Trump pulled us out of. And over 90 percent of America’s international agreements today are done in that manner.”

When the Obama administration established the Iran nuclear deal in 2015, The Daily Show with Jon Stewart contacted Krutz and Peake to better understand the context, leading to two sketches on the show.

In 2016 he was “content lead” for OpenStax’s American Government. OpenStax offers free, downloadable textbooks as an alternative to the increasingly expensive textbooks used in most classes. 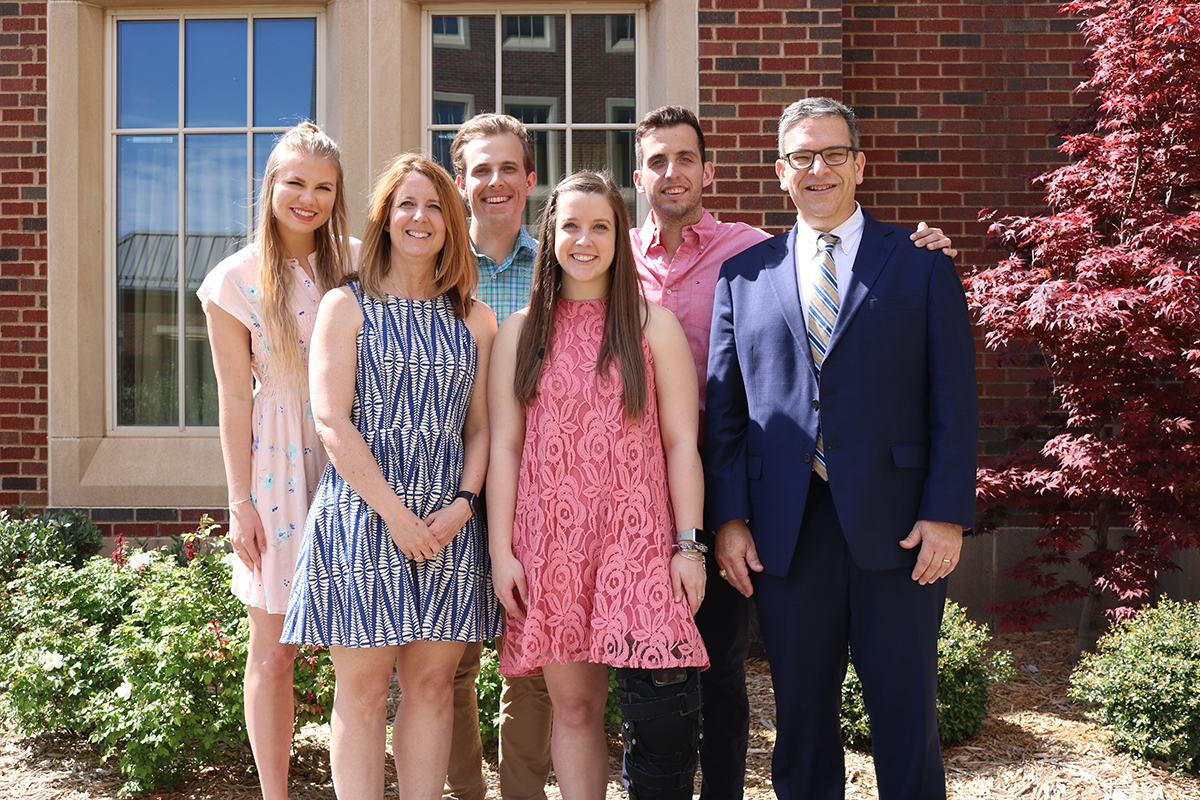 “This came from my experience teaching a large introductory American government class,” Krutz said. “Every semester, I’d have students come up to me and say, ‘I’m short on money and I can’t afford the textbook. Do you have any extra copies?’ So I started bugging OpenStax about creating one on American government. Finally they said, ‘We’d like to do this. Can you help us?’”

Krutz wrote the chapter on foreign policy and recruited colleagues to write other chapters based on his 15-page detailed outlines for each.

“It feels really good to have that out there in the market,” Krutz said. “Students are benefitting from that.”

Benefiting students is a big focus for Krutz, who strongly argues for the transformative power of higher education based on his own experience as a first-generation college graduate. His background also makes him passionate about increasing scholarship support.

“Scholarships increase access to CAS and OSU in a way that just wouldn’t be there otherwise,” Krutz said. “They help through the lifecycle of a college student’s career, increasing persistence and retention of students all the way to graduation. Ultimately, they allow students to graduate with less debt, which is an enormous benefit.”

His main priority at CAS is to improve student success. He hopes for accomplishments similar to what he oversaw at OU, where enrollment grew while student quality increased, freshman retention rose to more than 90 percent for three straight years and retention to senior year rose to 81 percent.

“I would also like to help faculty be more impactful,” Krutz said. “I like to talk about faculty as teacher-scholars. They have a nice synergy with their teaching and research together. I know I’ve gotten some of my best research ideas from teaching, and my teaching improves when I bring my research into the classroom. CAS will be at its best when faculty are focused on being excellent in both areas as well as service and community engagement.”

One way Krutz can enhance such work is his position as the Puterbaugh Foundation Chair. The endowment produces annual funds to support efforts that provide public goods through teaching, research and community engagement.

“It’s really quite an honor,” Krutz said. “I’m just elated that I have an endowed chair. Jay Puterbaugh was very successful in the business world, and he set up the Puterbaugh Foundation in McAlester (Oklahoma) to support a variety of purposes, including medicine, education and the sciences. He had a real passion for the liberal arts, foreign languages and international travel. So I’m thinking about that and learning more about him as I decide the best use for these funds.”

He added, “A strong CAS leadership team is so important, and I’m fortunate to have such an outstanding group there. They will be major assets as we set out to increase student success and the impact of our stellar faculty as both teachers and researchers.”

Krutz’s wife, Julie, is coding lab manager at OU’s Center for Risk and Crisis Management. They have three grown children. Matthew, 25, is a second-year medical student at OU’s College of Medicine and husband to Dominique, 24. They met as undergrads at the University of New Mexico. Ryan, 22, is a first-year law student at Saint Louis University. And Rachel, 20, is a psychology junior at Colorado College in Colorado Springs.