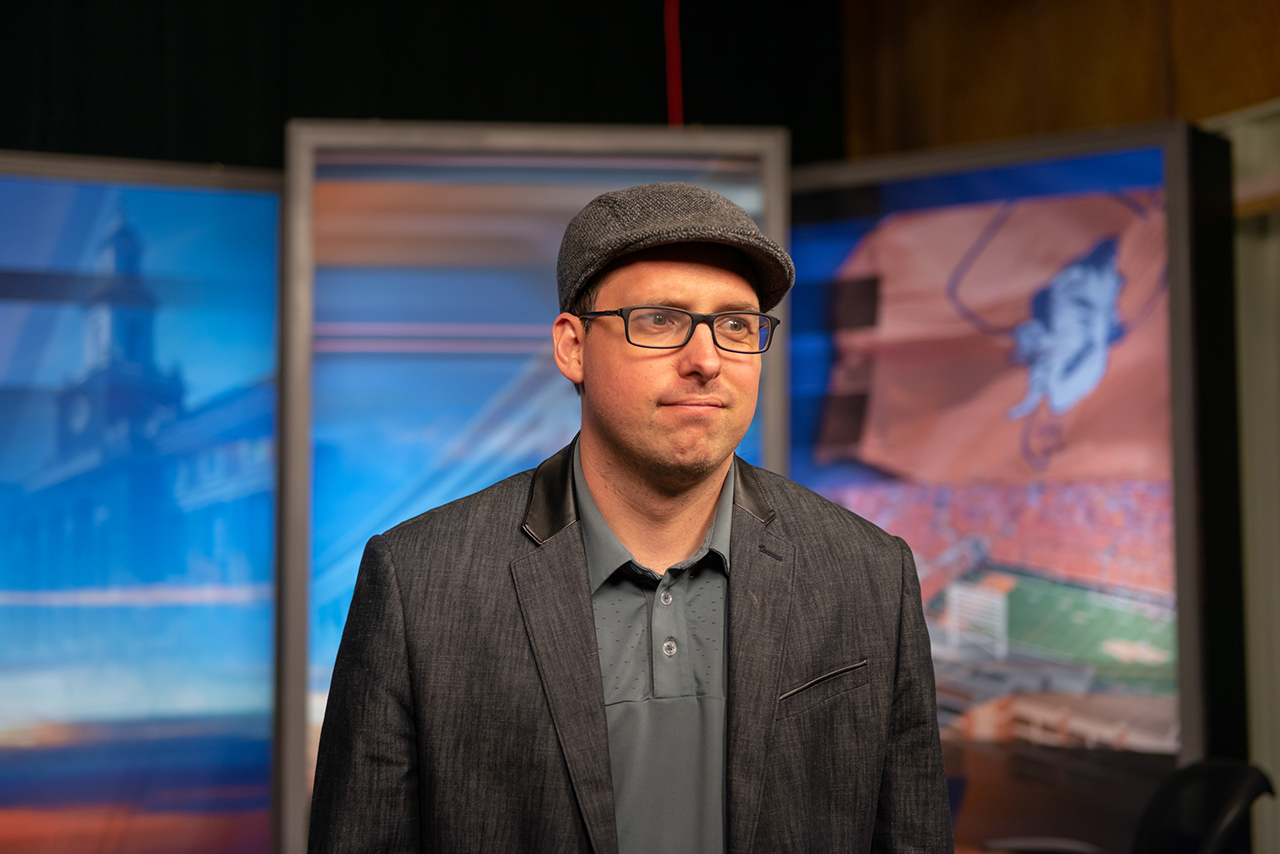 Shane Hoffman is famous. If you haven’t heard of “Prof Hoff,” then you probably don’t play MARVEL: Contest of Champions or spend hours watching reviews of Oreos and pizzas.

His YouTube channel has more than 30,000 subscribers and over 11 million views. Hoffman, a 31-year-old New Mexico native and a professor in the School of Media and Strategic Communications, is not your typical college lecturer.

“People find out that I’m a YouTuber with a big following, and they look at me differently,” said Hoffman, who has a bachelor’s degree in broadcast journalism from the University of Missouri and an OSU master’s in mass communication. “But I felt just as lucky and star-struck when I got the chance to teach at OSU seven years ago.”

Hoffman described getting hired by Oklahoma State University at 25 as “like playing Candy Land and getting to skip ahead” because he considers it the teaching job of a lifetime. 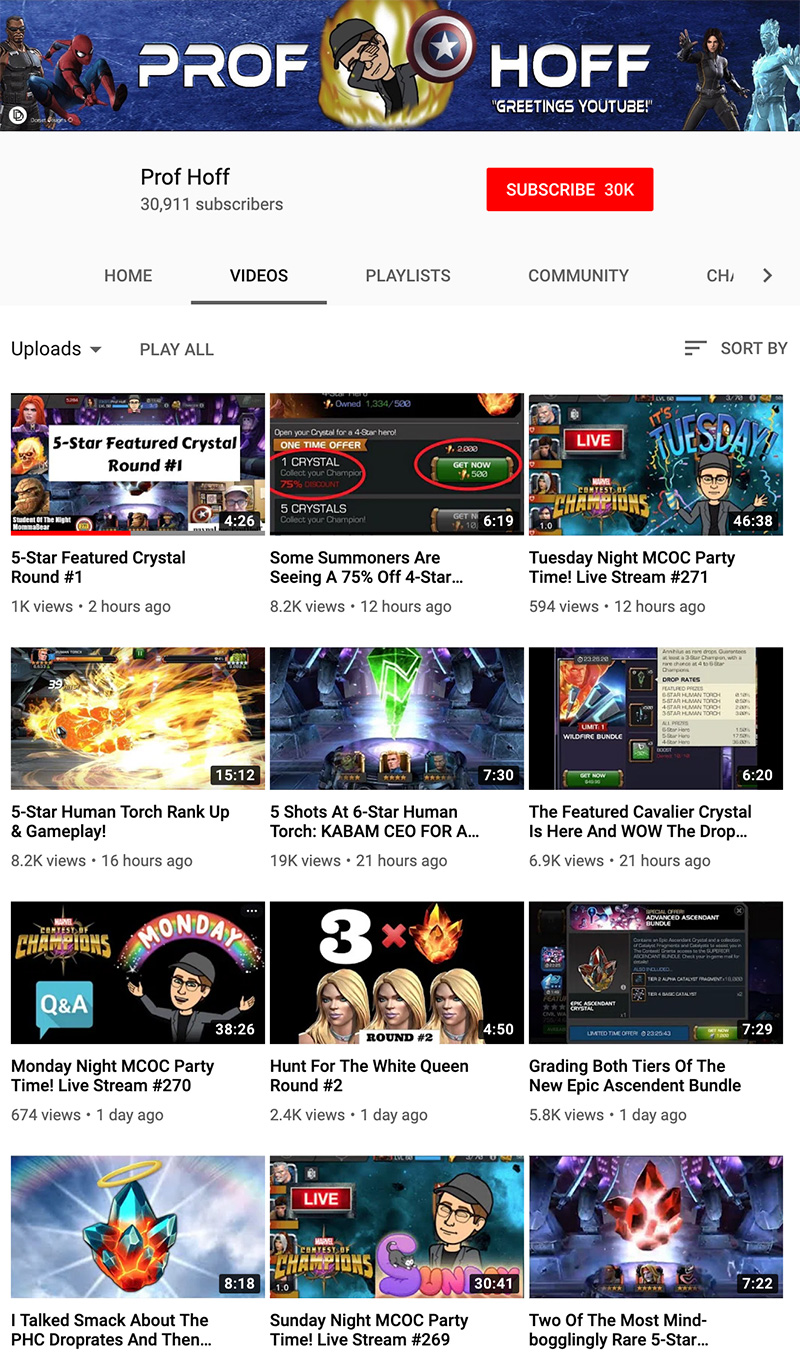 “That made me nervous since I don’t have 30 years of media experience or extensive credentials,” Hoffman said. “I have always felt confident that I could do the job, but my success on YouTube makes me feel better about my qualifications, bringing a national brand to OSU students.”

Hoffman hasn’t owned a video gaming system since the Nintendo GameCube, which was released in 2002. He turned to phone-based games to get a psychological fresh start after a traumatic break up.

“I saw a commercial for a free fighting game that was similar to the games I played growing up, such as Mortal Kombat,” Hoffman said. “I’m a huge Spider-Man nerd. I saw that you can fight as Spider-Man in this free game, so I downloaded it. The next thing I knew, I was playing it in my free time to keep me sane when I wasn’t grading.”

Hoffman is a triplet, and it was during a visit with one brother that he recorded himself opening crystals he had saved in the game, hoping to get good rewards such as a favorite champion or new resources.

“I played the game for two or three years, and I’ve never did it on YouTube,” Hoffman said. “My brother was like, ‘Why don’t you just record it? If you get something amazing, it’s fun to watch those videos.’ So, I recorded it and threw it online.”

Hoffman’s YouTube career quickly took off, attracting viewers from all over the world.

“Somebody from Denmark watched my video,” Hoffman said. “Later, a group of surgeons in Asia reached out to me and told me they watch my videos on their lunch break. I went from doing four a month to two to three a week, and then to two to three a day!”

When Hoffman has a few free minutes in his busy schedule, he often records and posts on his channel.

“I don’t have a ton of time to do this because I’m grading and have a full-time teaching job,” Hoffman said. “I did a video today that only took me four minutes to record, then I threw it on YouTube. It’s already up to 1,000 views in 30 minutes, which is pretty amazing too.”

He knows that the platform allows him to do more than just entertain. He can also inspire others, including those going through their darkest times. That became apparent to him one day when he was live-streaming and he saw a comment that froze him.

“Somebody wrote, ‘I want to say thank you. I’m about to kill myself,’” Hoffman remembered.

At that moment Hoffman knew he had the chance to use his platform to help stop this subscriber from taking his life. Hoffman has had struggles with mental illness, so he felt an immediate connection to the person, and he stopped what he was doing to reach out to the person. He gives out his contact information and also makes life-lesson videos, hoping to reach those who feel lost. He knows there are more than just teenagers watching his videos. There are also adults who are going through a rocky path in their lives.

“Every time I get to help somebody, it feels like, ‘I’m not the only person who survived it, and there’s hope out there’ and that they can turn out,” Hoffman said. “It makes the pain a little easier to bear. It also gives me a purpose, that I didn’t go through it for nothing because I can help them get the resources they need.”

That is one reason Hoffman receives about 1,000 fan messages a day. 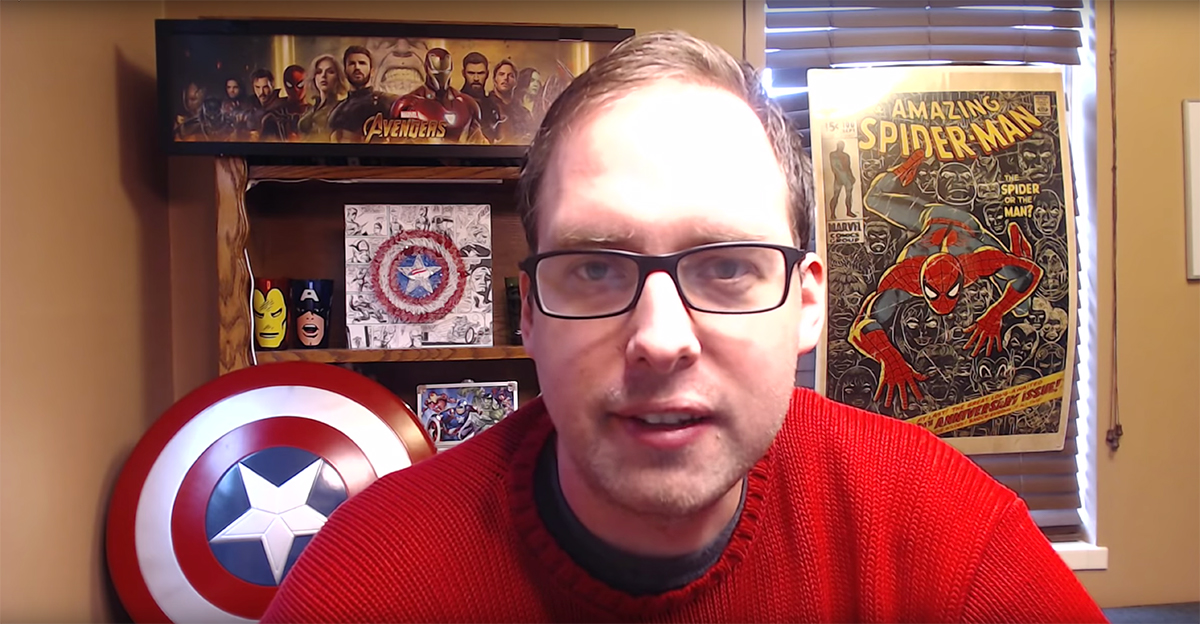 “I’ve heard ‘Never meet your heroes,’ which is the worst phrase,” he said. “I’m legitimately that person to some of these people. I want my fans to say, ‘I wish you could meet him because he’s just as genuine off camera as he is on.’”

“Prof Hoff” believes he was “brought into this world to teach,” and teaching helps him with his emotional health. He often opens classroom discussions about the issue of social media and mental illness in higher education.

“I think higher education, traditionally, is modeled on a pre-internet era, so we have to do a good job adapting and helping students face those issues, and we can’t be afraid to talk about them,” Hoffman said. “I’m way more open now about how media affects mental health, and I’m not afraid I’m crossing the line because every time I ask my students, it produces the best discussions in the class.”

YouTube inspired Hoffman to want to do his job better because he has “the ability to help people pursue a life-changing education by being the vessel that brings them to a great school.”

“What’s college if you can’t learn from other people’s experiences and have a voice and be willing to discuss issues?” Hoffman said. “That’s what I expected college to be when I came here.”