As a member of the College Art Association, Cristina González looks forward to receiving The Art Bulletin each quarter. Producing an article worthy of inclusion in this academic journal is a major goal of scholars in visual studies and art criticism. González earned an even higher honor recently when her contribution was featured as the cover story.

The associate professor of art history published “Beyond the Bride of Christ: The Crucified Abbess in Mexico and Spain” in issue No. 99, vol. 4, which is dated December 2017.

Rebecca Brienen, head of the Department of Art, Graphic Design, and Art History, is also an art-history professor. She said The Art Bulletin is probably the most respected U.S. journal in her field. 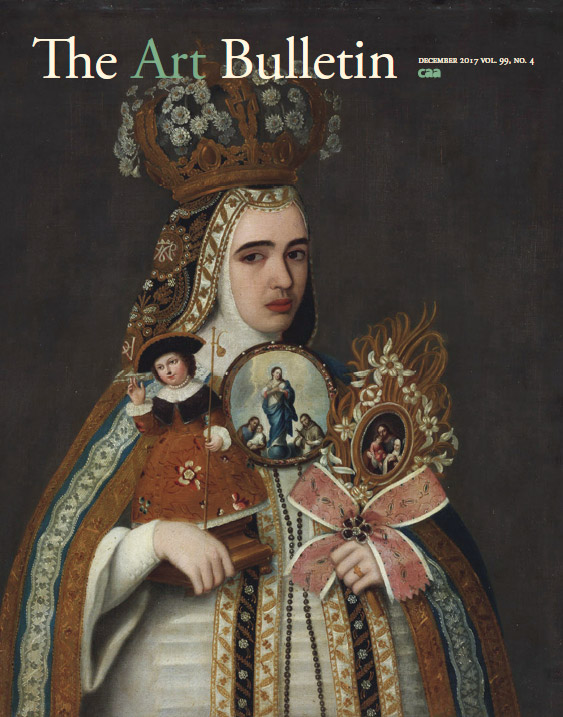 “It’s very difficult to get published in this because it’s very high-profile and has a challenging peer-review process,” Brienen said. “Cristina is building a wonderful national and international reputation as a scholar, and that is great news for OSU.”

González’s colleagues from around the world have sent her congratulatory calls and emails.

“Whenever we receive a new Bulletin, we immediately look at the titles, authors and institutions,” González said. “For OSU to have a faculty member contributing to this journal is major. We have a graduate program that is still young, and graduate students really pay attention to the statuses of prospective advisers at various universities. They want to make sure they are studying with someone recognized nationally so that they can get a job or complete a degree that will be taken seriously and help them earn acceptance into a doctoral program.”

In the summer of 2016, she was a Hargis Fellow at OSU’s Doel Reed Center for the Arts in Taos, New Mexico, when she received an email saying her article had been selected for publication pending some revisions.

“I made a bunch of adjustments and added a new section,” González said. “I spent as many hours on the editorial process in 2017 as I did writing it in most of 2015 and 2016. It has been consistently the last year about 10 hours a week. I was making changes two weeks before they went to press. It was absolutely worth it, but getting published in The Art Bulletin is not for the weak.”

The article points to the culture of prominent colonial-era convents in Mexico and Spain, where nuns often coveted expensive religious paraphernalia reflecting their elite status. Yet in austere convents, artwork might feature representations of crucified nuns. For González, the message these women were making is clear.

“In a period of religious turmoil and new institutional reforms, these nuns were proudly proclaiming their Christ-like status and all the power inherent in the posture,’” González said. “These nuns are saying, ‘We only answer to Christ. We don’t have to answer to an archbishop.’ So I see it as part of the story of visual culture in female communities and the Spanish world that hasn’t been fully written before.”

She was especially pleased with the image chosen for the cover of the journal – Portrait of Madre Maria Ana Josefa, a circa-1795 oil on canvas by José de Alcíbar.

“Look at how seductive she is even though she looks like she doesn’t need anyone,” González said. “In her accoutrements, she’s looking directly at you and saying, ‘Look at me.’ This image and the other works I studied express female agency. This woman is a nun in a very demanding environment, cloistered and under the ruling guidelines of the colonial world at the time, but she still has agency.

“She still has the power of expression, so I felt like she was my alter-ego or my appendage in some way from a previous life. I’m glad I could bring her to the cover.”

To read the full article, click here. Visit art.okstate.edu to learn more about González and the Department of Art, Graphic Design, and Art History.