Originally from Tulsa, Jenks High School, Lauren Foley’s first visit to Oklahoma State University immediately attracted her to the college. “As soon as I came on campus for the first time, the very first person I saw said it was “Hello! How are you? It was the family atmosphere that I found here,” she recalled. Lauren had toured other universities, but as soon as she came here, she noticed immediately how friendly and inviting everyone was. “It was that feeling of Cowboy Family that I loved. They were very quick to show me all the opportunities I would have if I did go here.” 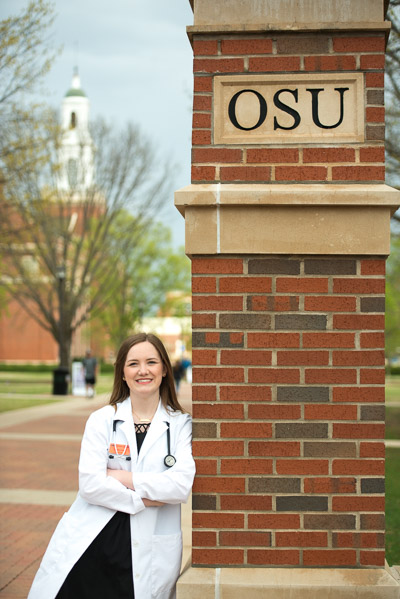 Lauren decided later to double-major in Zoology and Biology, with a minor in Spanish. Lauren knew she wanted to go into ‘something medical', which turned out to be veterinary school, but she also knew she loved nature and animals.

“So I started with Zoology, and along the way picked up biology,” Lauren recounts. “And I’ve loved Spanish ever since high school, so I thought, ‘As long as there are opportunities, I’ll just take advantage of them.’ And being the big college that it is, there are so many opportunities offered within it.”

Among those opportunities were being a member of the Kappa Delta Sorority, a cellist in the OSU Symphony, where she got to play with the band the band Kansas her freshman year. She also was able to serve on the Student Alumni Board, where she worked on the team to create “the Tradition Keeper’s Program,” a list of all the wild and wacky traditions at OSU. Lauren says that that sense of history is what set OSU apart from other universities: “Aside from the feeling of the Cowboy family, there’s the feeling that everyone is accepted. There’s a deep feeling of tradition, and history.” This feeling was only confirmed on her Study Abroad program to the U.K: Cowboys in Cambridge through Arts & Sciences Outreach.

“It was a great opportunity to interact with students and people that ordinarily I would never have had just in Oklahoma,” Lauren remembers. “I felt like I was part of OSU International.”

In the midst of all these adventures, Lauren continued to towards a possible medical career, even if she had some misgivings. “One of the people that influenced me early on was Dr. Amy Martindale, who introduced me to the concept of Freshman Research scholars,” Lauren recounts. “At the time I was thinking, ‘Oh my gosh, research is scary, and a big undertaking.’ She presented the program to me in such a way that I felt like it would be hugely beneficial to me. And that led me to meet one of my other mentors, Dr. Alexander Ophir, who I worked research with him for the next three or four years.”

As a member of the Freshman Research Scholarship Program, Lauren’s first project was working with “Social recognition and spatial memory in prairie voles.” The results of her first project revealed that the male voles are unable to distinguish one female from another female, but they can recognize one male from another.

“It was THAT moment right there that confirmed to me why I love research,” Lauren remembers with a grin. “When you get back a result and then think, ‘Huh… why is that?’ and you want to find out more.”

And from there, Lauren built her future research projects along the same line. Even when she moved over to the veterinary school, she still was spring boarding off the research and contacts that she had made during her time in the College of Arts and Sciences. Her project, entitled “Mitochondrial Biogenesis after an acute exercise stress in Alaskan Sled Dogs,” led her and her team to examine the question: How do dogs start conditioning for their races at the level of the muscle?

“It was all a whirlwind project/dream come true,” Lauren grins, “We went to Alaska and actually ran my dogs in the wilderness of Alaska.”

The project struck a personal note later when Lauren was introduced to one musher in particular.
“The cool part was that I had done a project in the 9th grade a writing project (following an individual musher in the Iditarod Race). Then, when I got to Vet school, we ended up going to the SAME musher that I had been assigned back in High school, Aliy Zirkle.
It was very surreal: in the 9th grade I was studying you, and in the 19th grade I met YOU! But there I was, on her porch, sharing coffee with her, surrounded by her dogs, and I was sitting there thinking, ‘Thanks, OSU.’

Whether in dogs or in humans, Lauren told us that Wellness is something she’s become personally passionate about, whether that be physical, mental, emotional:

“When I first arrived here, my very first advisor was a dear lady named Karen Smith, who has since passed away, unfortunately, but I’ll never forget her advice to me:

Don’t just get involved, but get INVESTED. Find what you’re passionate about, and dedicate yourself to those things.

If my example can inspire anyone, then I’m just thrilled.”