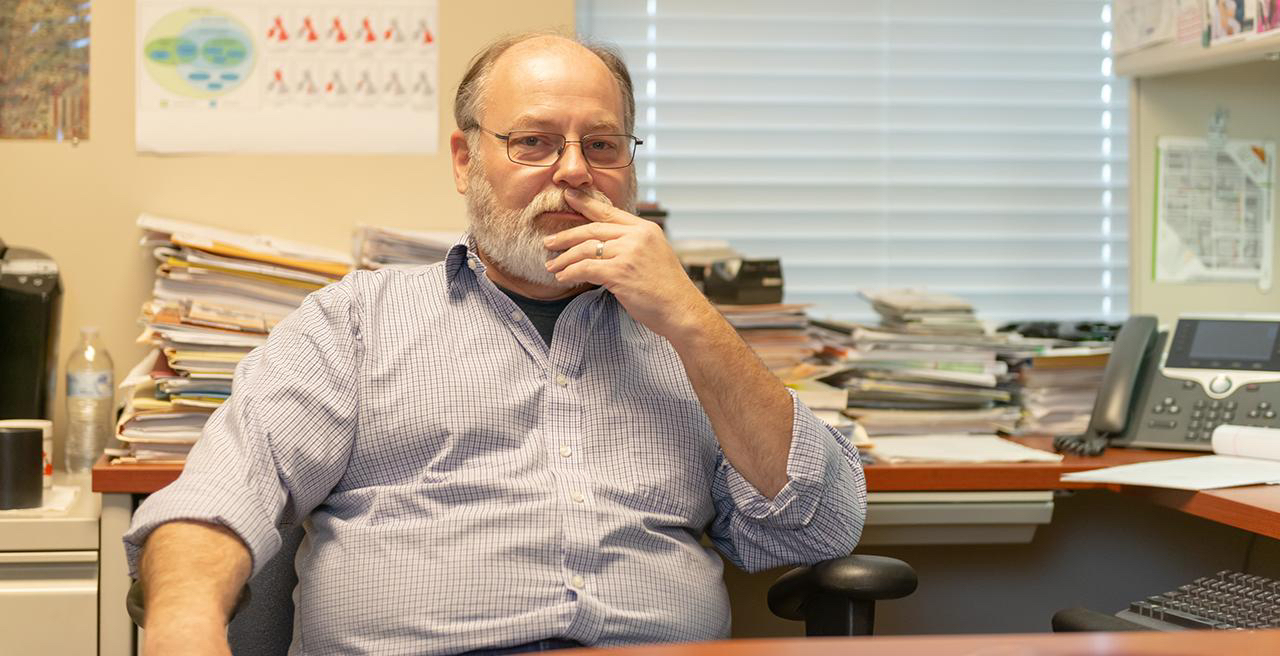 “My favorite class was Field Techniques – Geodata Collections,” he said. “We went on field trips and looked at the landscape. We collected data and made sense of it, and then drew maps to put it all together as something coherent.”

As a graduate student, Larson interned with National Geographic.

“I worked for Traveler magazine, and I did a number of maps that were published in the magazine,” Larson said. “That was the best thing I had done in my life to that point. I thought if I could continue doing (that type of work) I’d be happy for the rest of my life.”

“I can’t even tell you how many thousands of maps I’ve created,” said Larson.

Alyson Greiner, head of the Department of Geography, said Larson’s contributions are not limited to map-making.

“The department is incredibly fortunate to have Michael Larson,” Greiner said. “His leadership has significantly energized the professional operation of OSU Cartography Services. Michael goes above and beyond in the work that he performs, and he is always willing to lend a helping hand. He is a tremendous asset to our department.”

Larson describes cartography as “a formal discipline that looks at maps and map creation, as well as maps as both scientific documents and works of art. Cartography is about making and studying maps as tools for communication.”

The Cartography Services unit started out as a resource for faculty. The unit created maps and graphics for journal and book publications, as well as classroom media.

“That is still at the core of what we do,” Larson said. “But now we also help facilitate field data collections for research.”

Greiner detailed the many ways Larson’s contribution has helped elevate the services.

“Under Michael’s guidance, Cartography Services has developed an outstanding reputation across the university for the production of high-quality maps, research posters, and GIS products that are used in both research and instruction,” Greiner said. “Michael has also played an important role in securing and directing contracts with outside government and private organizations to support their cartographic and GIS needs.” 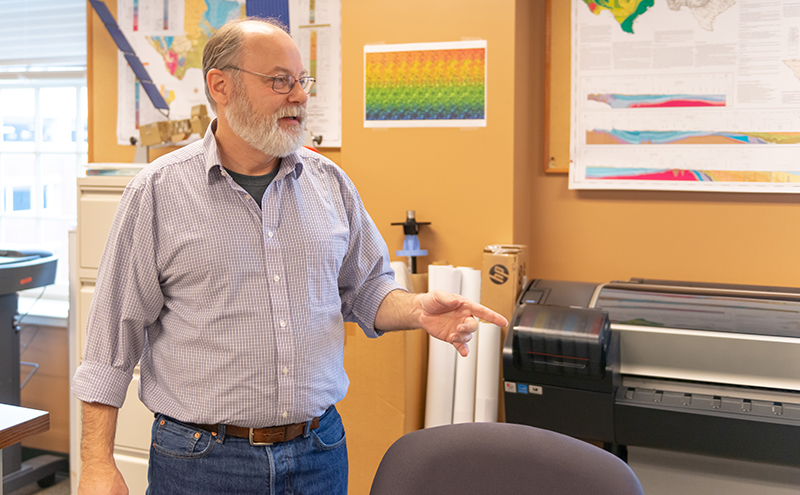 “For instance, Cartography Services worked with the State Historic Preservation Office on a long-term project,” Larson said. “Students and staff located latitude and longitude for landmark properties in the state history landmark inventory.”

The project continued for 10 years. Other examples include digitizing soil maps for 70 of the 77 Oklahoma counties for the U.S. Department of Agriculture Natural Resources Conservation Service, and working on 24 projects with the Association of American Petroleum Geologists.

The most rewarding part of Larson’s job is working with students.

“In addition to working as the cartography manager, I teach a computer cartography class,” Larson said. “When I discuss a concept with a student, and they finally get it, they get this look in their eyes. The biggest reward is seeing that look, and knowing that they get it, and that they’re going to take that with them for the rest of their lives.”

Larson has seen many changes to cartography in his career, and looks forward to technological advances in the future.

“Still, on-site surveying will always be necessary,” Larson said. “Someone is going to have to go out and kick the leaves and find the valve for a pipeline. You have to have quality people that know how to utilize technology and know when technology has limitations. That’s where our students come in. What we teach them and how we train them works not just in this discipline, but all disciplines.”

Larson frequently meets with former students at professional conferences and when working in industry.

“It’s kind of like homecoming,” Larson said. “Many of our students are at a point now where they are beginning to come back and mentor new students.”

During Larson's tenure, his work connecting with and mentoring students, both during school and during their careers, has helped build a program that goes full circle to provide the personnel, resources, and opportunities that will keep it going in the future.