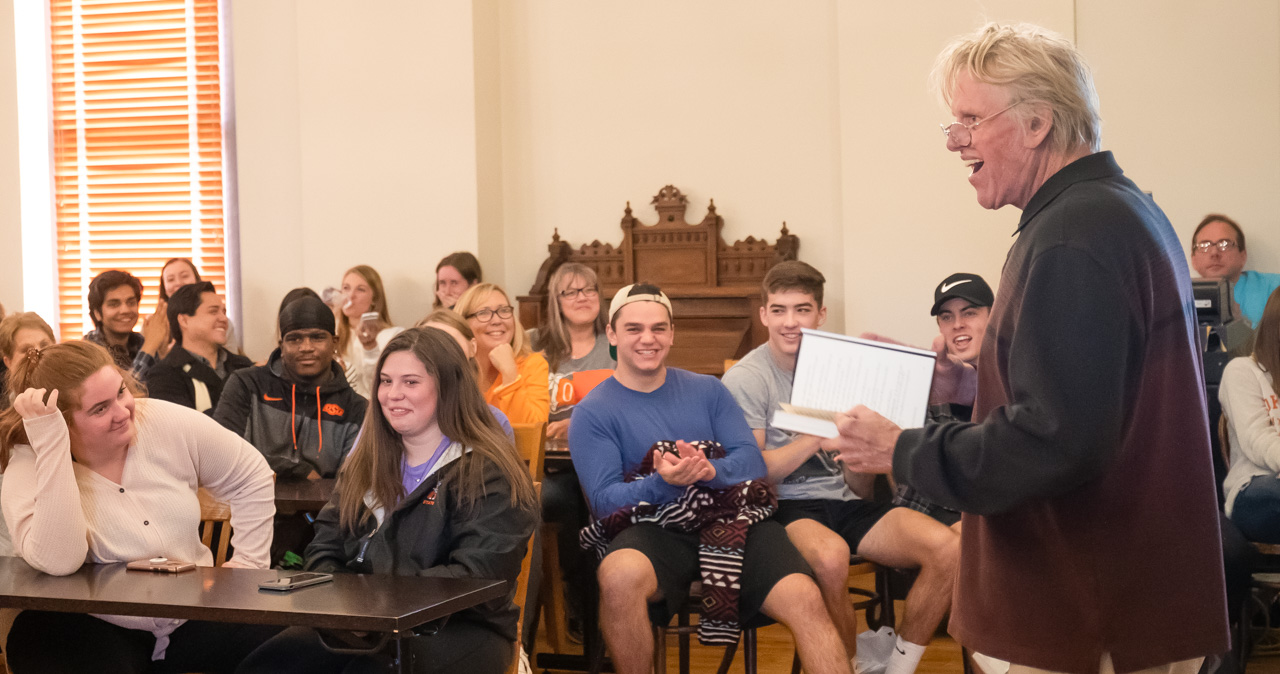 Gary Busey was only one credit away from graduation when his music drove him from Oklahoma State University to California, yet he never forgot the impact that OSU left on him. Busey accepted a football scholarship from Kansas State College of Pittsburg, now known as Pittsburg State University, but transferred to OSU after a knee injury. In Stillwater, he studied theatre under Vivia Locke, who set him on a new path. Locke was the legendary head of the Department of Theatre, and the 600-seat Vivia Locke Theatre inside the Seretean Center for the Performing Arts still bears her name more than three decades after she died.

“My teacher, Vivia Nail Locke, was instrumental in giving me the platform to stand on to do the motion picture business with power,” he said.

Busey spent years in California, touring with “The Rubber Band” before transitioning to acting. He has been in over 150 movies, making his major film debut in 1974 in Thunderbolt and Lightfoot. Some of his biggest roles have been in Lethal Weapon, Predator 2, Point Break, and The Buddy Holly Story, for which he was nominated for the Academy Award for Best Actor.

“I am regretful of one thing,” Busey said. “When I got nominated for the Academy Award, I didn't come back here and walk into her class, giving (Locke) the honor of my nomination. I give that to you, Vivia. You are the reason I was nominated.”

A severe motorcycle accident in 1988 left Busey with a fractured skull, forever changing his life. He was forced to re-learn how to walk, talk and play the guitar. Busey spent over three months in the hospital learning how to function again and beating the odds.

“I am very spiritual,” Busey said. “After my death during my brain surgery, in 1988, I went to the other side. I was surrounded by angels.”

Since his recovery, Busey has gotten back into the film industry and continued making music. Recently he even broke into the realm of writing, publishing his first book, “Buseyisms: Gary Busey’s Basic Instructions Before Leaving Earth.” In it, he talks about his life and his famously unique personality.

“You don't embrace who you are, you are it. You don't think of reasons to hold onto that have nothing to do with your truth. Don't do that. That will disengage you from your power,” Busey said.

He wants to inspire others to chase their own dreams, while also reminding them to have fun in life and enjoy all the little moments.

With all his continuing success and branching out into different creative endeavors, there have been failures. Yet he remains positive and thankful for everything that OSU offered him.

“So, you don't fail, you just find a better way to do it and I am living proof of that and Vivia Locke set my compass to success, honor, revelation and art. And art is only the search, it is not the final form.”