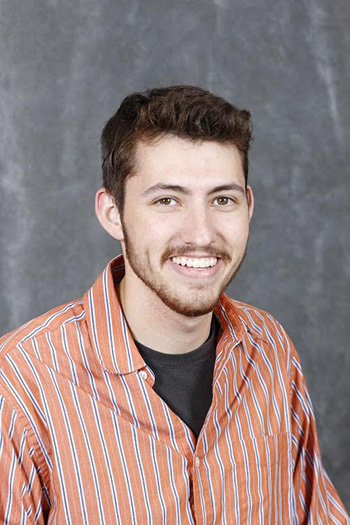 For the third time in three years, a journalist from Oklahoma State University has been named a finalist for the Pulitzer Prize of collegiate journalism writers.

Nathan Ruiz, a recent bachelor’s recipient in sports media and sports management from Reno, Nevada, is one of eight writers selected from colleges and universities across the country as a finalist in the writing category for the 2017 Hearst National Championships, to be held beginning May 29 in San Francisco.

Ruiz, currently working as an intern writing for the San Diego Padres on MLB.com, is the only finalist from a Big 12 school in any of the competition’s five categories.

“Excitement was the first feeling,” Ruiz said. “It’s something I’ve been working toward for four years, for the opportunity to go to San Francisco and compete in this.”

Ruiz earned his finalist standing for a pair of stories submitted to the Hearst Foundation by O’Colly faculty advisor Barbara Allen. One story features OSU standout receiver James Washington and his dying hometown of Stamford, Texas. The other tells the tale of an orange blazer loaned to former OSU Men’s Basketball coach Travis Ford.

Despite specializing in sports stories writing for the O’Colly, Allen classifies Ruiz as an instinctive writer who understands storytelling in journalism, saying there is nothing he cannot do.

“Nathan came here to study sports media, but he’s a jack of all trades as a journalist,” Allen said. “He can do it all, he can cover breaking news, cops…he is a whiz at social media.”

Ruiz encapsulates the core of what a journalism education at OSU can deliver, according to Allen.

“The baseline of an OSU education, whether it’s broadcast or sports, it’s the writing,” she said. “We turn out really good writers. That is the stated goal. So, even though it is a writing competition and he is a sports specialist, I have no doubt that he will do great.”

The winner will be announced during the Hearst Journalism Awards ceremony May 31 in San Francisco. For more information, visit www.hearstawards.org.