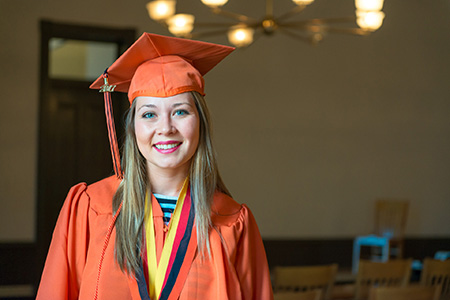 Like so many students like her, Chelsey Johnson arrived on the Stillwater campus four years ago as a freshman not knowing what she wanted to do. Arriving at OSU from the tiny Minnesota town of Cottonwood, she went from a town of about 1,200 to a campus that fits that many into just two of its 21 residential halls – Drummond and Bennett, for the record.

Now. The senior dual degree earner in strategic communications and political science will be leading the entire graduating class for the College of Arts and Sciences at commencement May 13, as the Spring 2017 Orange Gown graduate.

“It feels incredible,” Johnson said. “I was very shocked, and surprised, and honored, and flattered, and I had a million different thoughts when they called me … For me, it validates a lot of long nights in Edmon Low, and cups of coffee, and just all of the hard work into being an involved student for Arts and Sciences.”

Coming out of high school, Johnson was originally set to attend Valparaiso, a private university in Indiana. Though she was already familiar with Stillwater, often visiting grandparents who lived in the area, the decision to attend OSU came as a “last minute decision,” according to Johnson, following a tour she took after her high school graduation.

Johnson called the change of heart the best decision she has ever made.

“The orange gown, I think it is a sort of hope for the graduates, and the college,” she said. “It represents the promise and the potential the entire graduating class has, and the impact we hope to make in the future.”

Though she came in as undecided, Johnson eventually selected strategic communications because she felt any skills she gained “would be valuable no matter what job I end up having.” It was a semester-long study abroad trip to Estonia, however, that led her to add not only a second degree in political science, but a minor in Russian and Eastern European Studies.

“I was taking classes that was looking at the European Union and their political relationship with Russia,” Johnson said. “It was really that which pushed me to declare political science and pursue my honors degree in that.”

A love of travel fostered by her experience in Europe continues to drive Johnson as she plans ahead for life after Stillwater. As a student, she served with the President’s Leadership Council, the Student Government Sustainability Committee, the OSU Student Foundation, and the Study Abroad office. After graduation, she intends to spend a few years in international service, possibly with the Peace Corps, before considering her options for graduate school.

“Travel is really my passion,” she said, “and I have incorporated that into so many different aspects of my life, from studying abroad that semester, to interning in Brussels [Belgium] last summer.”

Johnson remembered being intimidated coming to OSU, coming from a graduating high school class of less than 50 to a university with a freshman class that year of nearly 4,000. She credited the professors of the College of being open and easily accessible, taking the time to invest in her as a student and as a person, with helping to keep her from getting lost in the crowd. It’s a sense of community Johnson feels is unique at OSU to Arts and Sciences.

“I’m so honored to receive this distinction, but I really need to express my gratitude to the people of this university, the professors and my peers,” Johnson said. “They have taught me so much about what it means to be educated at a land-grant institution, and to live a life rooted in teaching, research, and service … To be a student, and to learn in a life-long learning process.”